In this article, I am going to discuss Master Theorem. Please read our previous article where we discussed Properties of Asymptotic Notations. Here, you will learn what master theorem is and how it is used for solving recurrence relations.

The master method is a formula for solving recurrence relations of the form:

T(n) = aT(n/b) + f(n),
where,
n = size of input
a = number of subproblems in the recursion
n/b = size of each subproblem. All subproblems are assumed to have the same size.
f(n) = cost of the work done outside the recursive call, which includes the cost of dividing the problem and cost of merging the solutions

The master theorem is used in calculating the time complexity of recurrence relations (divide and conquer algorithms) in a simple and quick way.

If a ≥ 1 and b > 1 are constants and f(n) is an asymptotically positive function, then the time complexity of a recursive relation is given by

Each of the above conditions can be interpreted as:

If the cost of solving the sub-problems at each level increases by a certain factor, the value of f(n) will become polynomially smaller than nlogb a. Thus, the time complexity is oppressed by the cost of the last level ie. nlogb a

If the cost of solving the sub-problem at each level is nearly equal, then the value of f(n) will be nlogb a. Thus, the time complexity will be f(n) times the total number of levels ie. nlogb a* log n

If the cost of solving the subproblems at each level decreases by a certain factor, the value of f(n) will become polynomially larger than nlogb a. Thus, the time complexity is oppressed by the cost of f(n).

All divide and conquer algorithms (also discussed in detail in the Divide and Conquer chapter) divide the problem into sub-problems, each of which is part of the original problem, and then perform some additional work to compute the final answer. As an example, a merge sort algorithm [for details, refer to Sorting chapter] operates on two sub-problems, each of which is half the size of the original, and then performs O(n) additional work for merging. This gives the running time equation: 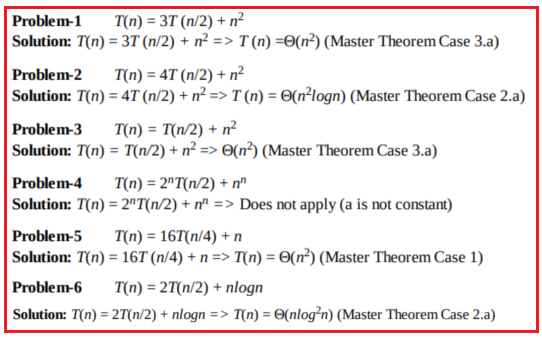 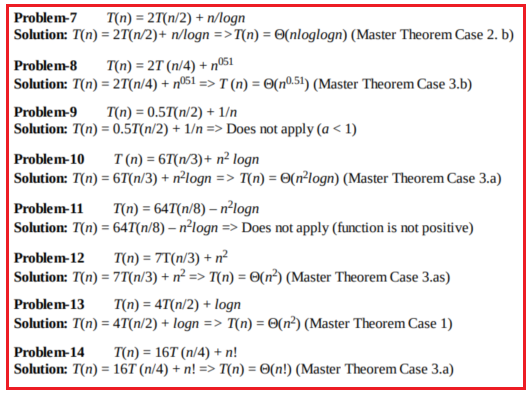 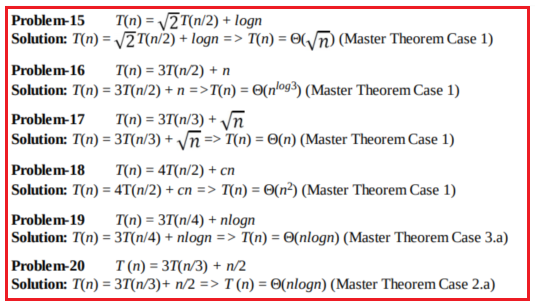 The variant of Subtraction and Conquer Master Theorem

Method of Guessing and Confirming

Now, let us discuss a method that can be used to solve any recurrence. The basic idea behind this method is: guess the answer; and then prove it correct by induction.

In other words, it addresses the question: What if the given recurrence doesn’t seem to match with any of these (master theorem) methods? If we guess a solution and then try to verify our guess inductively, usually either the proof will succeed (in which case we are done), or the proof will fail (in which case the failure will help us refine our guess). 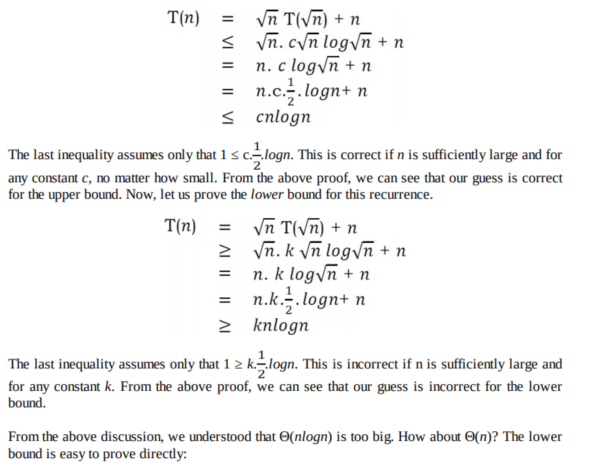 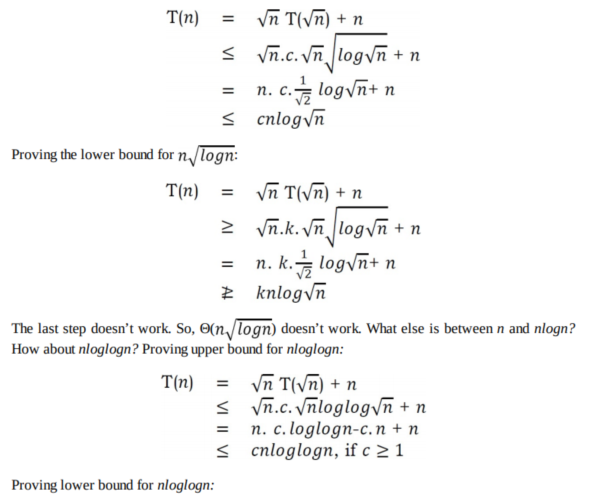 When one event in a sequence affects the cost of later events:

Let us consider an array of elements from which we want to find the k the smallest element. We can solve this problem by using sorting. After sorting the given array, we just need to return the kth element from it. The cost of performing the sort (assuming comparison-based sorting algorithm) is O(nlogn). If we perform n such selections then the average cost of each selection is O(nlogn/n) = O(logn). This clearly indicates that sorting once is reducing the complexity of subsequent operations.