Back to: MySQL Tutorials for Beginners and Professionals

Database Normalization in MySQL with Examples

Take a look at the example table. 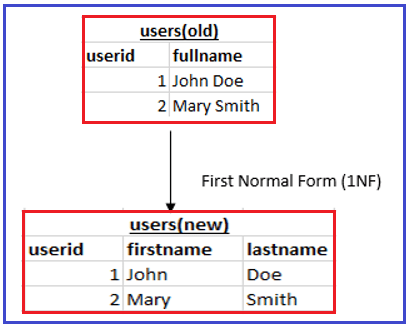 The old database table ‘users’ store ‘userid’ and ‘fullname’ of the users. According to first normal form rules, each column must contain only one value but in the case of fullname the data value can further be stored as 2 separate columns ‘firstname’ and ‘lastname’. Therefore, we modified the old database and created 2 columns, firstname, and lastname to store the values separately. This change makes the database table in first normal form.

What is Partial Dependency?

When a non-prime attribute is functionally dependent on a part of a candidate key, it is called partial dependency.

How to remove Partial Dependency?

Now the tables are not partially dependent.

What is Functional Dependency?

When there is a relationship exists between the primary key and non-key attribute within a table it is called functional dependency.

What is Transitive Dependency?

How to remove Transitive Dependency?

To remove Transitive Dependency, we can split the tables. In the above example to remove transitive dependency from the table we can remove the ListingType column from the table and create a separate table for it as follows:

Now the tables are not transitive dependent.

Take a look at the example old clients table, the address column is interdependent. The address depends upon the city and the city depends upon states and so on. Therefore, we can break the address column to separate cities or states table. Create primary key cityid and stateid for cities and states tables respectively. And link the primary keys to appropriate tables using foreign keys. This change makes the database table in third normal form.

It is an extension of the third normal form and is also known as the 3.5 Normal Form.

In the above table, one student can enroll in multiple subjects. A professor is assigned for each subject to the student. There can be multiple professors who can teach one subject. Here, StudentID and Subject form the primary key because by using StudentID and Subject we can able to find all the columns of the table. Also, the subject attribute depends on the professor’s name because one professor teaches only one subject but one subject may have two different professors. Therefore, the table is not in BCNF because here the subject is a prime attribute and the professor is a non-prime attribute.

To make this table satisfy BCNF, we can decompose this table into two different tables as follows: