throw and throws keywords in Java

By default, all predefined exceptions are created and thrown implicitly and identified by JVM. But if we want to throw the exceptions explicitly then we have to use throw keyword.

The “throw” keyword is used to throw an exception manually. In most of cases, we use it for throwing checked exceptions explicitly. The “throw” keyword must follow the Throwable type of object and It must be used in method logic. Since it is a transfer statement, we cannot place a statement after the throw keyword. It leads to a compile-time error “Unreachable statement”.

ArithmeticException is a runtime exception so the compiler does not check its Exception Handling.

Below code shows correct syntax for throwing a checked exception

The “throws” keyword is used to report that raised exception to the caller. It is mandatory for checked exceptions for reporting if they are not handled.

What is the need of having throws keyword when you can handle exception using try-catch?

Suppose you have several such methods that can cause exceptions, in that case, it would be tedious to write this try-catch for each method. The code will become unnecessarily long and will be less readable.

Another advantage of using this approach is that you will be forced to handle the exception when you call this method, all the exceptions that are declared using throws, must be handled where you are calling this method else you will get a compilation error.

The “throws” keyword must throw a Throwable type of class name. It must be used in method prototype after method parenthesis. 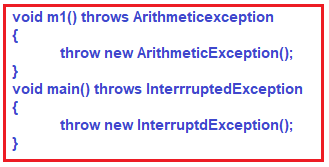 We are not allowed to write a catch block with checked exception without throwing it from the try block. It leads to CE: “exception never thrown from the corresponding try statement”.

In below program catch block leads to the above exception 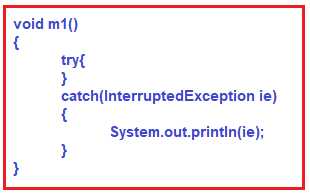 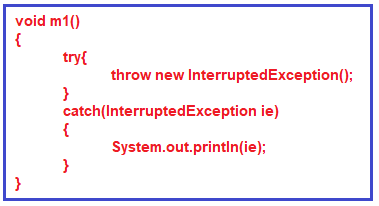 We can catch and also report using throws 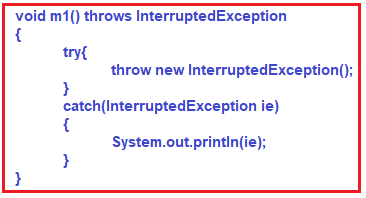 Difference Between Throw and Throws keywords in java

In the next article, I am going to discuss How to Create a Custom Exception in Java with Examples. I hope you enjoy this article. I would like to have your feedback. Please post your feedback, question, or comments about this article.