What are Object Files?

An object can be said to be serialized only when its class implementing Serializable Interface. If we are reading or writing any object which is not serialized then JVM will throw a run time error or Exception saying NotSerializableException.

What is Serializable Interface in Java?

The main job of a marked or tagged interface is providing instructions to JVM to perform a special task. Example: Cloneable, Serializable, EventListener, etc.

If we are declaring a class by implementing a serializable interface then we are giving an instruction to the JVM to allow us to read the object from and write the object into object files.

Note: In small applications, the industry generally prefers serialization and deserialization persistence operations on the files.

What is Serialization in Java?

What is Deserialization in Java?

The process of reading data from a file and constructing a new java object having those data is called de-serialization. Or we can say that the reverse process of creating an object from a sequence of bytes is called deserialization. For better understanding, please have a look at the following image.

Deserialization is a process of converting a stream of bytes into an object which is nothing but reading the object from an object file. To perform this deserialization we use the class called ObjectInputstream. 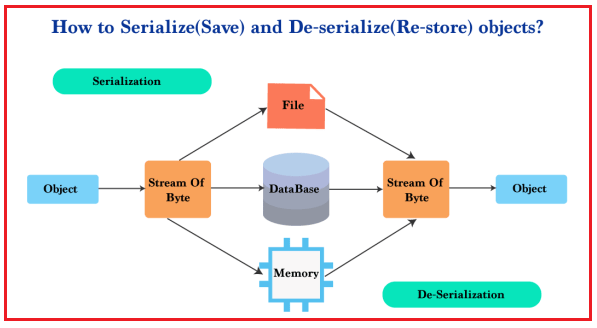 The constructor of object is never called when an object is deserialized. Associated objects must be implementing the Serializable interface.

The High-level streams interact with files through low-level streams and can work with data like string values and object values, etc.

The Low-level streams interact with files directly and can deal with low-level data like characters and bytes.

Note: java objects becomes Serializable only when the class of that object implements java.io.Serializable marker interface.

The object of this class is to support only complete serialization.

The object of this class support only selective serialization

The transient member variable allocates the memory inside the object but they will be marked for not participating in object serialization.

Let us create a Student Class.

Create SerializationDemo Class and then copy and paste the below code in it.

Here, we are reading the data from a deserialized object. create DeSerializationDemo Class and then copy and paste the below code in it.

What is the marker interface?

An interface that is used to check/mark/tag the given object is of a specific type to perform special operations on that object is called a marker interface. Marker interface will not have methods, they are empty interfaces.

What is the need for a marker interface?

Inside those particular methods, that method developer will check that the passed object is of the type the given interface or not by using instanceof operator.

When we transfer the transient variables then it will hide the original value and transfer the default values.

This class is used to read the data from the keyboard or write the data on to monitor. This class will be used in Console based applications (which are running on command prompt and it is introduced in Java 1.6 version.

If a serializable class doesn’t explicitly declare a serialVersionUID, then the serialization runtime will calculate a default one for that class based on various aspects of the class, as described in Java Object Serialization Specification.