Applet in Java with Examples

The Applet class is contained within the java.applet package. The applet contains several methods that offer you detailed control over the execution of your applet. java.applet defines three interfaces : AppletContext, AudioClip, and AppletStub. This chapter examines the Applet class, which provides inspiration for applets.

Basically, in Java we have two types of applications:

What is Applet in Java?

All applets are subclasses of (either directly or indirectly) of Applet. Applets aren’t standalone programs. Instead, they run within either an internet browser or an applet viewer. Execution of an applet doesn’t begin at main(). Actually, few applets even have main() methods. Output to your applet’s window isn’t performed by System.out.println(). Rather, in non-Swing applets, the output is handled with various AWT methods, like drawString(), which outputs a string to a specified X, Y location.

Types of Applets in Java:

It is important to state at the outset that there are two sorts of applets.

There are many advantages to the applet. they’re as follows:

Drawbacks of Applet in Java

The Applet Class in Java

Applet provides all necessary support for applet execution, such as starting and stopping. It also provides methods that load and display images, and methods that load and play audio clips. Applet extends the AWT class Panel. In turn, Panel extends Container, which extends Component. These classes provide support for Java’s window-based, graphical interface. Thus, Applet provides all of the necessary support for window-based activities. 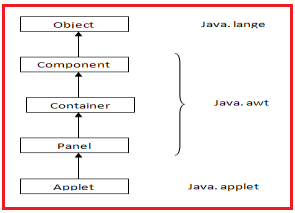 Every Java Applet needs to go through a series of phases from initialization to destruction in order to complete its execution. The first step is to inherit the java.applet.Applet class. This class aids with various methods that help in holding up a basic framework for the Java Applets. The various methods involved in the life cycle of Java Applet have been depicted by the below diagram. 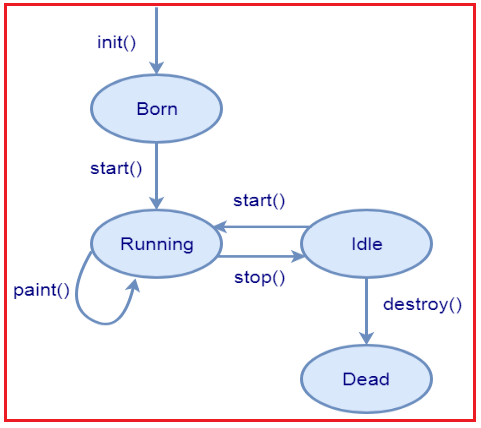 An applet is a window based program. Its architecture is different from the console-based programs. Applets are event-driven. An Applet waits until an event occurs. The run-time system notifies the applet about an event by calling an event handler provided by the applet. Then, the applet must take appropriate action and then quickly return. This is a crucial point.

The applets override a set of methods that provides the basic mechanism by which the browser or applet viewer interfaces to the applet and controls its execution. It is important to understand the order in which the various methods are called. When an applet begins, the following methods are called:

When an applet is terminated, the following sequence of method calls takes place:

init(): The init() method is the first method to be called where you ought to initialize variables. This method is named just one occasion during the run time of your applet.

start(): The start() method is named after init(). It’s also called to restart an applet after it’s been stopped. When start() is named whenever an applet’s HTML document is displayed onscreen. So, if a user leaves a webpage and comes back, the applet resumes execution at the start().

paint(): The paint() method is named whenever your applet’s output must be redrawn. This example can occur for several reasons. paint() is additionally called when the applet begins execution. The paint() method has a parameter of type Graphics. This parameter will contain the graphics context, which describes the graphics environment during which the applet is running. This context is employed whenever output to the applet is required.

stop(): The stop() method is named when an internet browser leaves the HTML document containing the applet- when it goes to a different page. When stop() is named, the applet is perhaps running. You ought to use stop() to suspend threads that don’t get to run when the applet isn’t visible. You’ll restart them when start() is named if the user returns to the page.

destroy(): The destroy() method is named when the environment determines that your applet must be removed completely from memory. At now, you ought to release any resources the applet could also be using. The stop() method is usually called before destroy().

In some situations, your applet may need to override another method defined by the AWT, called update(). This method is called when your applet has requested that a portion of its window be redrawn. The default version of update() simply calls paint(). However, you can override the update() method so that it performs more subtle repainting. In general, overriding update() is a specialized technique that is not applicable to all applets.

How to run Applets in Java?

An Applet program is compiled in the same way as you have been compiling your console programs. However, there are two ways to run an applet.

This comment contains an APPLET tag that will run an applet called MyApplet in a window that is 200 pixels wide and 60 pixels high.

An Applet viewer creates an environment that mocks the look and feel of a stand-alone program with no interaction with a web browser, even though it does involve a browser to run an applet. Appletviewer is included with Sun’s JDK package, but not with Sun’s JRE package.

AppletViewer is a standalone command-line program from Sun Microsystems to run Java applets. Appletviewer is usually employed by developers for testing their applets before deploying them to an internet site. The appletviewer command connects to the documents or resources designated by URLs and displays each applet referenced by the documents in its own window.

How to run the Applet Program using Appletviewer?

Example: An Applet Skeleton in Java

Although this skeleton does not do anything, it can be compiled and run. When run, it generates the following window when viewed with an applet viewer:

The repaint() method has four forms:

Here, maxDelay specifies the maximum number of milliseconds that can elapse before the update (0 is called. If the time elapses before the update() can be called, it isn’t called. There’s no return value or exception thrown.

In addition to displaying information in its window, an applet can also put a message to the status window of the browser or applet viewer on which it’s running. To do so, call showStatus() with the String that you simply want to be displayed. The status window may be a good place to offer the user feedback about its occurring within the applet, suggest options, or possibly report some sorts of errors.

The APPLET tag in HTML allows you to pass parameters to your applet. To retrieve a parameter, use the getParameter() method. It returns the value of the specified parameter in the form of a String object. Thus, for numeric and Boolean values, you will need to convert their string representations into their internal formats.