In this article, I am going to discuss Web API Attribute Routing with some examples. As we already discussed in the ASP.NET Web API Routing article that the Routing is a pattern matching mechanism to match an incoming HTTP Request to an action method of a controller.

The ASP.NET Web API 2 and ASP.NET MVC 5 supports a new type of routing called attribute routing. As the name implies, attribute routing means attributes are used to define routes. The Attribute routing provides more control over the URIs in your Web API application by defining routes directly on the actions and controllers. For example, you can easily create URIs that describes the hierarchies of resources.

The earlier style of routing called convention-based routing is still fully supported by Web API. In fact, you can combine both approaches in the same project.

Why do we need Web API Attribute Routing?

One advantage of convention-based routing is that all the URI templates are defined in a single place, and the routing rules are applied consistently across all the controllers.

But the convention-based routing in Web API makes it hard to support certain URI patterns that are common in RESTful APIs. For example, resources often contain child resources: Customers have orders, movies have actors, books have authors, etc. It’s natural to create URIs that reflects these relations:

Let’s understand this with an example.

Step2: Right-click on the “Models” folder and add a class file with the name Student.cs and then copy and paste the following code.

To do so Right-click on the Controllers folder and add a new Web API2 controller – Empty. Name it StudentsController.cs. Copy and paste the following code.

In Web API1, we had the convention-based routing that defines the routes using the route templates. When we create a new Web API project the Web API Framework creates a default route in the WebApiConfig.cs file. The default route is shown below 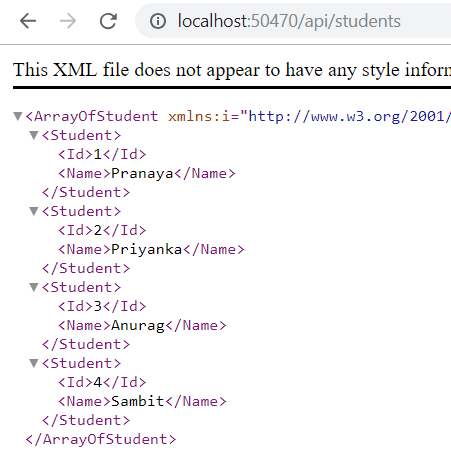 This can be very easily achieved by using the Attribute Routing. Here is what we want the WEB API Framework to do

To achieve the above, we need to decorate the GetStudentCourses() action method with the [Route] attribute as shown in the below image

Let us see some of the examples where attribute routing makes it easy.

In the below example, the route “/api/v1/students” would be routed to a different controller than the “/api/v2/students” route.

In this example, “1” is an order number, but “pending” maps to a collection.

Can we use both Attribute Routing and Convention-based routing in a single Web API project?

Note: You need to configure the Attribute routing before the convention-based routing in ASP.NET Web API.

What are the advantages of using Web API Attribute Routing?