Back to: Python Tutorials For Beginners and Professionals

Functional oriented programming is a program paradigm where programs are built around functions. Functions can be used as parameters, can be returned, can be used in other functions etc. Here functions are everything and they should always return the same output for a particular input. Erlang, Haskell, and Sakaila are the languages which are built on this paradigm.

POP languages are C, Pascal, Fortran etc. These languages used procedures and functions to perform the task. This kind of programming divides the program into subtasks composed of several procedures or functions or routines. This approach is called Procedure Oriented Approach.

OOPs is paradigm or methodology to implement software. OOPs languages are C++, Java, Dot Net etc. While developing any software, by using OOPs we need to implement it using classes and objects. This approach is called Object-Oriented Programming.

Where does Python belong to?

For example, let’s list down the properties a vehicle possess

Now, if we consider ‘vehicle’ as class, then the properties which we listed above will be attributes of that class. The types of vehicles available are

These types of vehicles will be objects to the class vehicle. All the properties of a car, like the name of the vehicle, number of wheels it has, its colour, its brand can be stored in the class ‘vehicle’. In order to access the information of the car we can create and object for the class and access it. Let’s say ‘car_obj’ is the object created for class ‘vehicle’ and assume the following data

For both the objects, car_obj and bike_obj, the class is the same i.e vehicle, the attributes are the same, but the data is different. You can create any number of objects to the class and use the attributes to save the data.

We can say that class is a template or blueprint with which we can create objects. The objects of the same class contain different data but the same attributes.

A class is a blueprint or template which contains attributes.It is a specification of properties and action of objects. 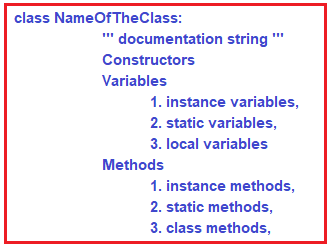 Documentation string represents the description of the class. It’s up to you to include this i.e its optional. It’s a good programming practice to include this.

Constructors are used for initialization purpose and variables are used to represent the data. Variables can be of three types are as follows:

Methods are used to represent actions. Methods are again of three types are as follows:

In the above program ‘Employee’ represents a class which is defined by the developer. display is the method in the class. The program doesn’t give any output because we haven’t created any object to access the class members (attributes).

Self variable in Python:

In the demo1.py the display method has a parameter named ‘self’. Let’s talk about it:

An object is an instance of a class. Using objects we can access class members, store data etc. They are like physical entities of class.

Here, we created an object ‘emp_obj’ for the class ‘Employee’. With the created object, we called the display method which is printing something to the console. Therefore, after creating the object of a class, we can access the attributes available in that class with the created object as shown below.

Can we create more than one object to a class?

Yes, the main concept of OOPs is class acts as a template for the objects. So, any number of objects can be created for one class.